Sally and James – Love In The Time of Caronavirus

The plan for Sally and James’ wedding was simple – a small ceremony with family and only a few close friends at Sally’s family home in Brighton, followed by a fully catered for, intimate dinner in the dining room. They were saving the big party for a few weeks later – a soirée event with a big band and cocktail dress code.

When it came to discussing how we were going to approach the ceremony we immediately started talking about the underlying meaning behind everything we were doing and how important it was to tie family into everything from the very beginning. Layers of sentiment in deliberate yet subtle ways.

Sally is the kind of person who will tell you about anything and everything. She is an open book. James is a man of fewer words, his actions do the talking. It occurred to me that the intimate group of family and friends witnessing the ceremony would probably know their whole love story!

Instead of telling everyone stories they’d already heard, I suggested I interview key members of their families to write the ceremony based on their insights into their relationship. Sally and James loved the idea. James insisted they shouldn’t see the script beforehand, he wanted to hear everything fresh, in the moment.

Then COVID-19 charged at us! Wow! We went from “yep, we’ll be right, it’s only a small ceremony outside”, to “Shit! What if we go into full lockdown and aren’t able to do it at all!” Looking ahead at the UK and where they were, the possibility of being completely housebound felt quite real. Then Scott Morrison announced weddings were to be only take place with 5 people present – the couple, the celebrant and two witnesses.

“In the days following Scott Morrisons announcement, we postponed our wedding, brought it forward, then cancelled it, before finally deciding to get married just the two of us, giving Prue only 48 hours to plan our ceremony. It was an emotional rollercoaster, which Prue rode beside us.”

To add another layer of heartache, the ceremony was planned to be at Sally’s parents’ home because of the sentimentality tied to it. It had been their family home for 24 years. And as home to six, it had always been a home full of noise. A home full of love. And an open door, welcome to all friends and family. Family is the beating heart of the house, as much as it is the beating heart of Sally and James’ relationship. But the house had been sold. And there was a date after which, getting married in this meaningful place wouldn’t be possible. 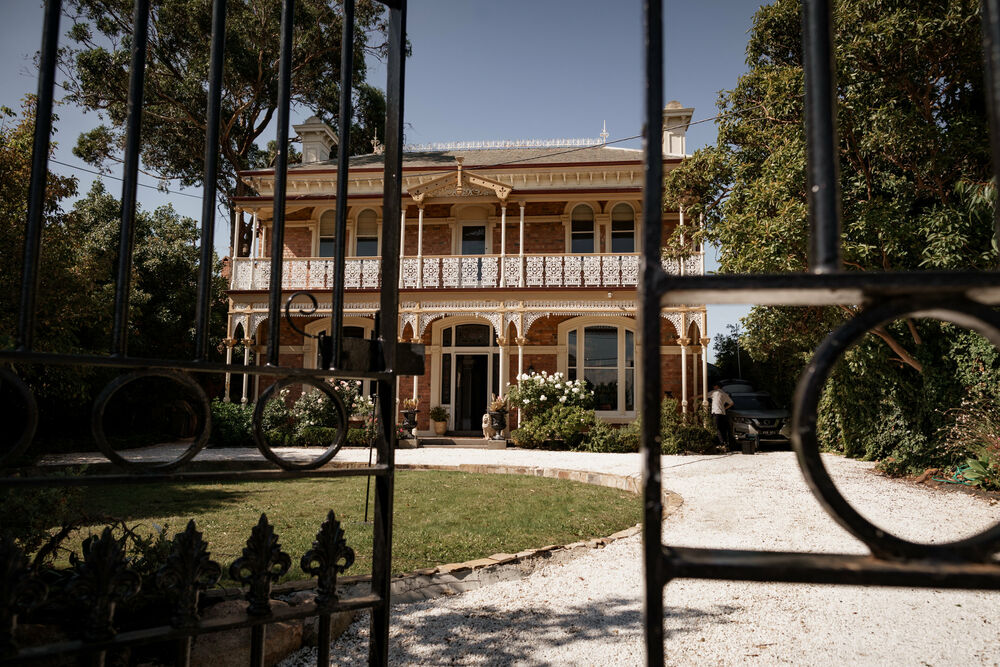 Here’s an excerpt from their ceremony:

"Over the years Tup and Ross, Jon, Liz, Sally and Olivia have hosted many people and many parties here. Before they find another place to call home, this is a fitting farewell. Especially because this is not the first wedding Manor Street has hosted. The family who lived here before yours, the Boyds also had their own wedding here. The wedding of their daughter Sally – in this very spot.

Of course, the Boyd family are well renowned for their art and creativity – so maybe there’s something about this house? Perhaps in its stained-glass windows, and rooms full of charm and elegance stirs a spark for creativity that has been embraced by the Perrett girls and fostered by both Ross and Tup. And this house also seems set on seeing its daughters named Sally get married here.

With all this weight on their shoulders, Sally and James made the decision to get married despite the restrictions. She called me on the Thursday and asked me if I could marry them on the Saturday! Aware that this meant the people who are most important to them couldn’t be present, they wanted to ensure family, now more than ever were echoed throughout the ceremony. With my help, we arranged a live stream, so their sisters and brothers, mums and dads, and nephews could watch it while self-isolating at home. We even put it on FM radio so Granny Gwen could tune in from her nursing home!

They made the call out for everyone to get dressed up like they would have. To send them photos and tune in half an hour early for a playlist of songs they love to set the tone.

I was on a tight schedule of phoning around to get input for the ceremony! It was a conflicting time for family. Never before had weddings been so stripped of traditions, and not by choice. Grasping that they wouldn’t be hugging Sally and James before the ceremony and standing by their side was huge – let alone not even being there. Although everyone was respectful of this being Sally and James’ journey. And they really showed their support by participating in my little survey.

My goodness, did I get some great stories and feedback! It was so much fun to weave the stories into the script and see Sally and James’ minds churning in the moment wondering who said what?!

Sally’s sister Olivia gave me some cracker insights including how Sally first introduced James to the family – a birthday party for her (their!) dog Bodhi.

“His first formal introduction was an interesting one. A family birthday party thrown for Bodhi, with an elaborate dog cake and three dogs at the head of the table. Poor Bodhi is waiting to celebrate another birthday like that, so it seems this once-off event served its purpose. Ever since then, James has been welcomed into the family with open arms.”

Everyone agreed, Sally and James are similar in many ways but different in ways which make them grow together.

“they are so alike, but so different. Jim is the calm in Sally's storm. Sally is the sunshine in his rain.”

And there was a lot of talk about the country boy inside James, and how much Sally had enjoyed sharing that aspect of his life, embracing it as part of her own identity.

In the madness of the 48hrs preparation, I arrived at Sally’s parents’ house ready to kick off the ceremony. Welcomed by their awesome photographer Tony Evans and livestreaming superstar (celebrant/DJ/MC/slashie) John Edney.

Sally’s dad had decorated the ceremony space which was nestled in their front garden. Like us, he had pulled together what he could at the last minute. And he did a fabulous job of blending style with ceremony. The ornaments he chose had underlying sentiment and meaning which Sally immediately understood and loved. 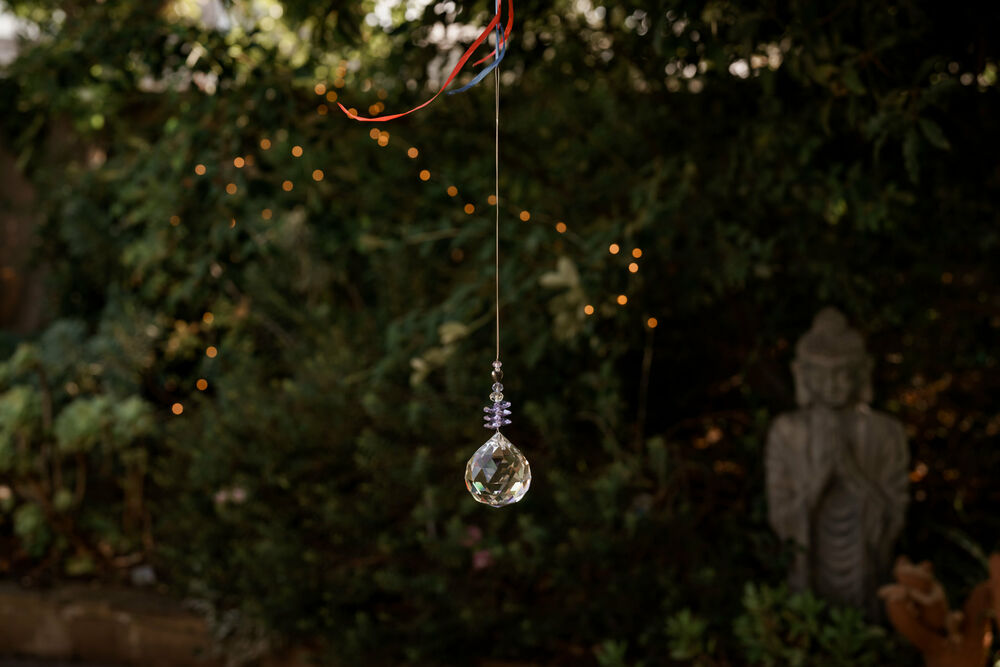 The plants framing the altar were the bonsai that he lovingly made and nurtured, despite not having full function of his right hand since suffering a stroke. The hanging crystal was an inclusion from James’ family. His mother Maree hoped that their altar would be bathed in rainbows, to acknowledge James’ sister Amanda, who passed away. The curling ribbon he used to hang it was from the birthday present Sally and James had given him two days earlier.

Sally’s mum filled a crystal vase with rose petals with a special request that I shower the married couple with them, reminiscent of what her own mother did for her on their wedding day.

In the garden, Sally’s dad had put clay statues of frogs on logs which Sally’s aunty Merri had made. When she arrived, Sally came up to look at everything and burst into laughter “He’s put out the frogs on dicks!” A family in-joke he knew she would appreciate.

James’ mum Maree had dropped off a bouquet to Sally earlier that day. She had no input or directions from Sally, she simply chose what she thought they would like and it was perfection! All the brightness and happiness Sally and James bring to each other’s lives in a neat posy. 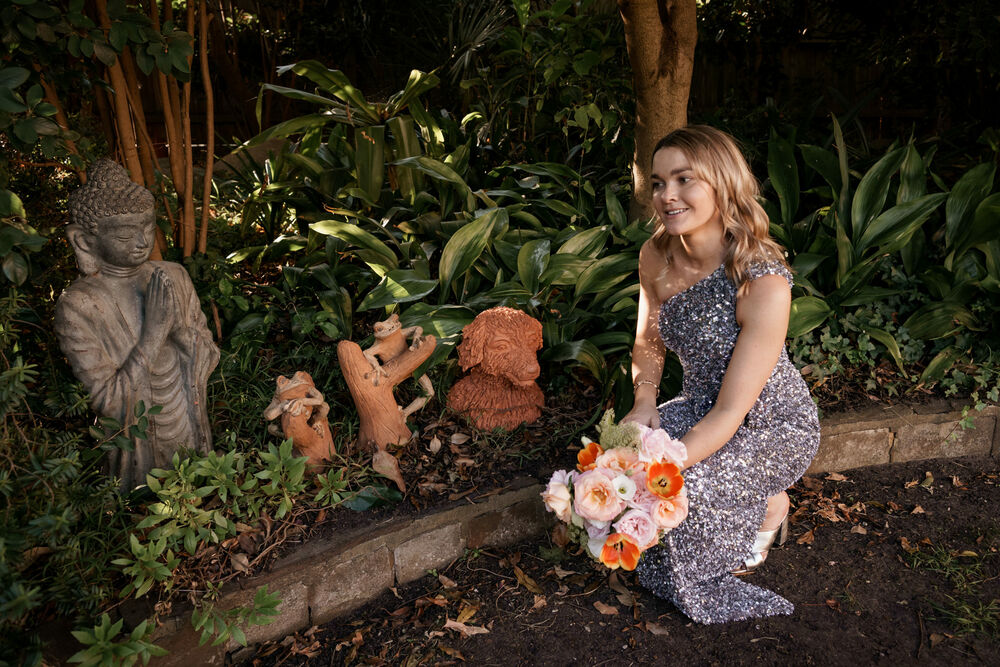 Sally knew her dad and mum wouldn’t be walking her down the aisle. They wouldn’t get to stand up and be acknowledged as we had planned. But she made sure they were included as part of the preparations. She slipped into her dress outside as they toasted with her from inside the house. An equally beautiful moment shared, irrespective of circumstance. 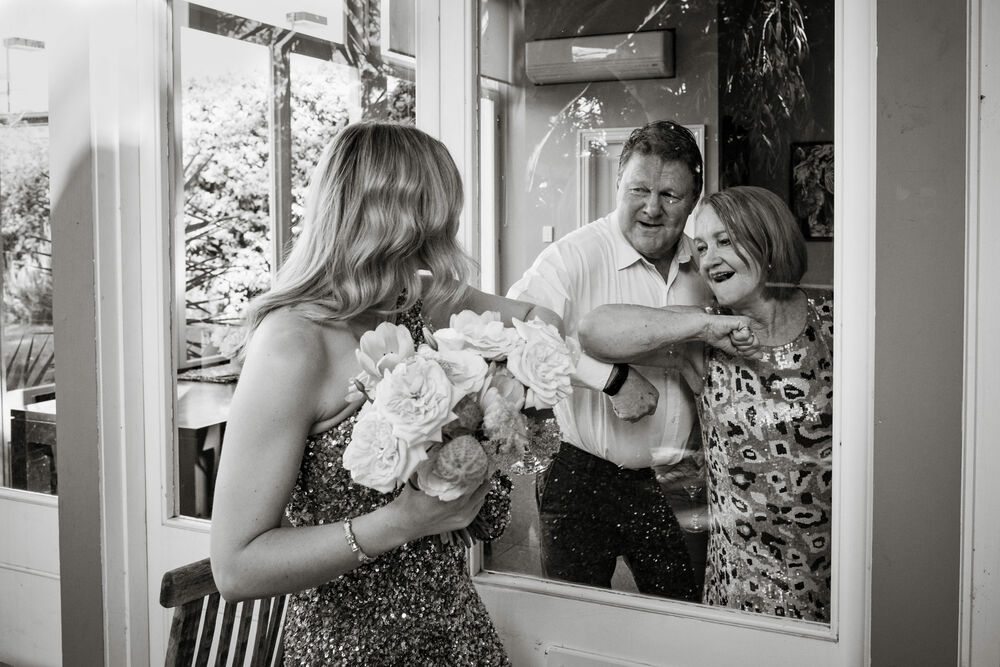 Ready to roll, Sally walked down “the aisle”, making her way down the side way, up onto the terrace veranda, down the steps and out onto the grass where her gorgeous groom and best man Bodhi were waiting.

She walked to Leonardo’s Bride “Even When I’m Sleeping”. This was a song I’d shared on my Instagram weeks before and at the time Sally and James hadn’t been able to get it out of their heads. The lyrics are entrenched with meaning. What was originally a love letter between the two of them, turned into a serenade for their families. “Please excuse my apparent lack of ceremony, my mind is clear.” Them saying, while this isn’t the most traditional way of starting a marriage, they were very much committed to each other and starting their lives together. In fact, they could not wait! 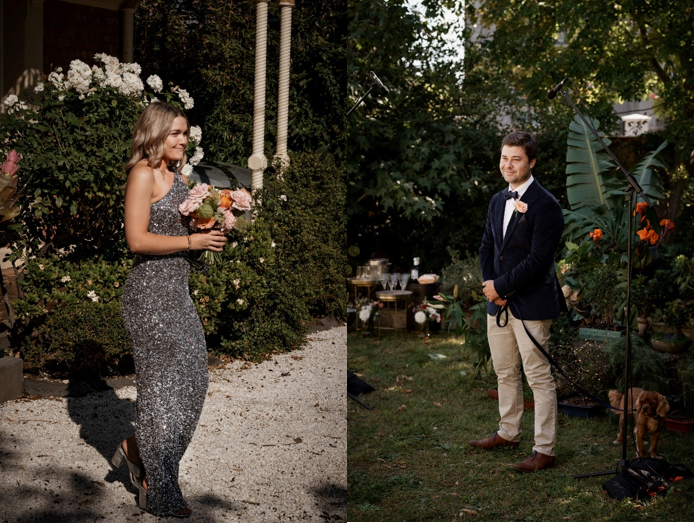 Streamed into lounge rooms, offices, cars, bedrooms and balconies, Sally and James said “I do”. They wrote their own vows with absolutely no input from me! And they were perfection! My favourite was James saying to Sally, “You are the Gin to my Tonic”.

Without time to organise proper wedding bands, James received Sally’s Nanny Bet’s ring and Sally, James’ Granny Gwen’s ring as the symbol of their everlasting commitment to each other.

The pair of them laughed, smiled and cried throughout the whole ceremony.